Brachiopods reached their peak of diversity during the Devonian. Brachiopods, you recall, are shelled animals that superficially resemble clams, but they are their own phylum. Pretty much the first fossil collecting field trips I went on as a college geology student turned up lots of Devonian brachiopods.

At some places, brachiopods were so abundant that their shells made up small reefs. One of the most famous exposures of a Devonian reef is the Falls of the Ohio River, at Clarksville, Indiana. Brachiopods are common there, but it’s fundamentally a coral reef, possibly the most diverse mass of Devonian corals in the world. It also contains the usual suspects in a reef – crinoids, bryozoans, trilobites, mollusks, and more, as well as fish bones. The limestone containing the reef dates to Middle Devonian time, about 385 million years ago, a time when North America was near the equator but south of it. Today, the Falls of the Ohio is an Indiana State Park. 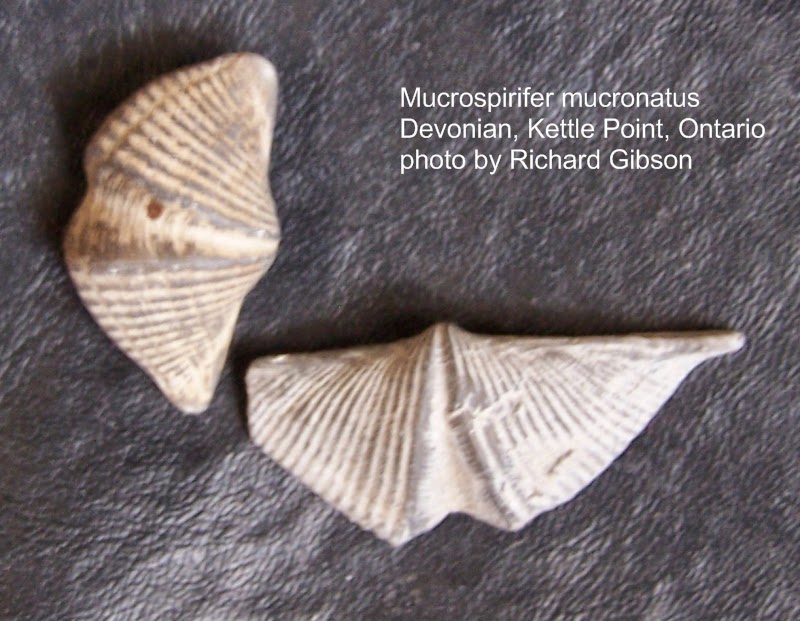 Some of the most common Devonian brachiopods belong to the genus Spirifer. They actually range from the Ordovician to the Jurassic Period, but I can tell you from personal experience that they’re really common in Devonian rocks in the Michigan-Indiana-Ohio-Ontario region. Spirifers have a long hinge line, the place where the two shells join together. Often, the hinge line is the widest part of the shell, and this gives them a characteristic wing-like shape. Their name, spirifer, means spiral-bearing, and it comes from a tiny coil within the animal that was the support structure for the lophophores, the fleshy, tentacle-like things that brachiopods used to feed. The spiral structure is often preserved even though it’s tiny, because it was probably made of calcite just as the shell was.

There were at least 40 families of spirifers and dozens of species, but they are all extinct today.

Another group of brachs that was common during the Devonian was the productids. These brachiopods are sometimes called spiny brachiopods for the long projections that grew on their shells. In some species, the spines were as long as or longer than the shells themselves. It seems that they might have used the spines for stability, but a 2013 paper on the subject does not rule out the possibility that they might have used the spines as some kind of sensory organ.