Yesterday we talked about insects and the fact that they are not at all common in Devonian rocks, although they were there, on land. The bigger deal from the point of view of us vertebrates is the emergence on land of walking, air-breathing vertebrate animals. That also happened in the Devonian.


To understand this evolution, the best thing you can do is read Neal Shubin’s book Your Inner Fish. I’ve recommended it before, but it’s very pertinent in this connection. Shubin and his team found an animal fossil called Tiktaalik, in 2004 in Arctic Canada. It represents an evolutionary transition between the lobe-finned fishes, the sarcoptyrigians that we’ve discussed previously, and the true tetrapods, four-limbed animals that walked on land. Tiktaalik has essentially, wrist bones and fins with bones getting much closer to fingers than fins. There are also structures that suggest it had lungs and skeletal features that made Shubin and others pretty certain that it must have spent time on land. It was the earliest known animal with an amphibian lifestyle. 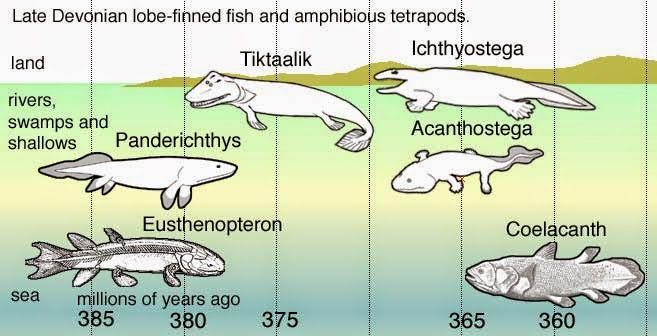 Amphibians – frogs, toads, salamanders, and some other groups, live in both worlds, the land and sea. The name itself, amphibian, means “both kinds of life.” While some amphibians are largely aquatic, others are almost entirely terrestrial, living on land. But all amphibians return to water to lay their eggs, and some of their embryonic development, such as tadpoles in the case of frogs and toads, is also in water, even if the adults spend virtually their entire lives on land.

Tiktaalik lived about 383 million years ago, the Late Devonian, 15 million years before the Devonian ended. Its well-known successor, Ichthyostega, was also Devonian, but from later in the period, probably about 365 million years ago or so. Neither Tiktallik nor Ichthyostega can be classified with certainty as an amphibian. The limb-like fins were probably still fins. But they very likely did spend some time on land, even if it was very near the water, perhaps in ways similar to mud-skippers today, which use their strong fins to scuttle across open land between puddles of water.

Ichthyostega was pretty big – more than a meter long, and Tiktaalik wasn’t much smaller. These were not tiny critters.

Mary Anning was born May 21, 1799. In the early 19th century, women were pretty much precluded from the realm of scientific study, but Mary Anning became a paleontologist and expert on the Jurassic fossils around her home at Lyme Regis, in Dorset, England. She discovered the first ichthyosaur – the marine reptile – to be correctly identified. Even though as a woman she was excluded from membership in the Geological Society of London or other scientific organizations, a few years ago the British Royal Society named her one of the 10 British women who have most influenced the history of science.


Graphic by Dave Souza under GNU Free Documentation License
Posted by Richard Gibson at 5:00 AM