First today, for those of you who are into vertebrate fossils, I came across a nice blog report on this year’s meeting of the Society of Vertebrate Paleontologists in Berlin. The blog has a nice summary of new findings, from Archaeopteryx to dinosaur colors, to giant kangaroos. LINK

Australia and Antarctica began to rift away from each other back in the Cretaceous, probably about 95 million years ago, with the initial faulting and rifting beginning in the Jurassic. The separation was pretty slow for many millions of years, so that by Eocene time the distance between Antarctica and Australia was only about 500 km, or 300 miles. The speed of separation and amount of sea-floor spreading increased in Eocene time from maybe 4 cm per year to 7 cm, and today there’s an ocean basin 2100 miles wide between them, and it’s still growing. 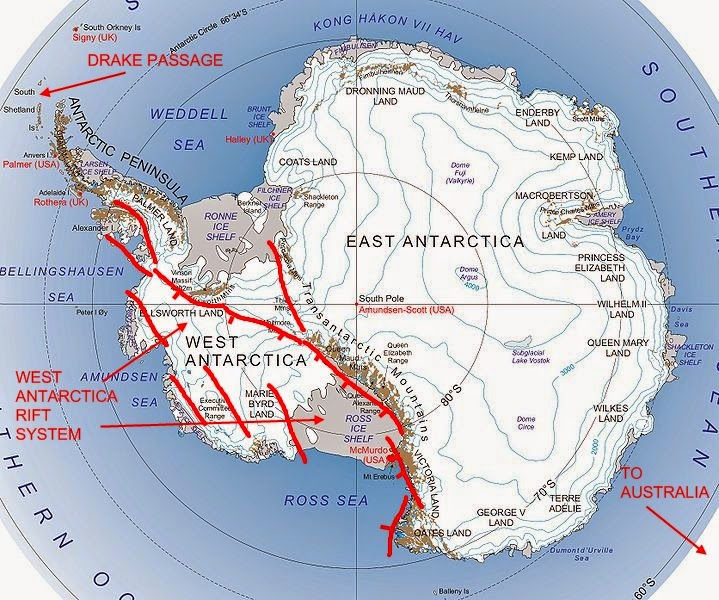 Within Antarctica, all was not quiet. The West Antarctica Rift was the beginning of a pull-apart between the larger East Antarctic craton and the smaller West Antarctica area. It started probably during the Cretaceous and continues to this day. The flank of the rift is more or less the Trans-Antarctic Mountains today, and the active volcanism there including Mt. Erebus is probably related to ongoing activity along the rift. Climate change together with the uplift of the mountains in central Antarctica led to the development of snow cover there beginning about 34 million years ago. The boundary between the Eocene and Oligocene, 34 million years ago, is marked by a decrease in carbon dioxide levels, and general global cooling, which allowed for the beginning of ice buildup in Antarctica. Before about 34 million years ago, there was no ice in Antarctica even though it was near the south pole.

The West Antarctic Rift is positioned about where Australia and New Zealand were attached to Antarctica in the old Gondwana. The Tasman Sea, between Australia and New Zealand, began to extend and separate those areas back in the Cretaceous, about the same time as the West Antarctic Rift began. Even though it’s been active for close to 100 million years, the West Antarctic Rift hasn’t really gone anywhere. The active volcanism shows that there is still extension of the crust, breaking, to let the magma up, but an ocean has not formed between West and East Antarctica. The Tasman Sea spread for about 22 million years, 80 to 58 million years ago, Cretaceous into the Paleocene epoch of the Cenozoic, and then apparently stopped. Today, Australia, the Tasman Sea, and about half of New Zealand – the part west of the Alpine Fault – are together on the same tectonic plate. The whole package is pushing against the Pacific Ocean Plate, making for some complex, violent interactions along oceanic trenches north of New Zealand and in collision zones in New Guinea. The oceanic part of the Australian Plate west of Australia itself is subducting beneath the southern part of Asia, in Indonesia.

So – the bottom line for Antarctica is that two things – tectonics and the positions of continents, together with climate change and general cooling, led to the beginning of the Antarctic ice sheet about 34 million years ago, about at the boundary between the Eocene and Oligocene epochs of the Cenozoic. It’s had a long time to build up its ice – much longer than the ice ages that happened in the past 2 million years or so.

Map from NASA, annotated by Gibson (generalized, based on various sources).
Posted by Richard Gibson at 4:00 AM