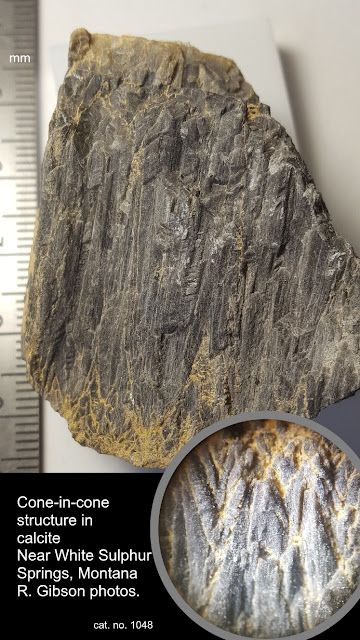 The mineral here is just calcite (even though it’s mostly almost black), but it shows interesting features. Cone-in-cone structures are nested cones, seen here in cross section. The inset shows them a little better – in the main photo, they are represented by very narrow vertical triangles.

It’s not certain how these things form, but some kind of systematic displacement because of microscopic crystal growth variations is probably the favored idea. The variations might be because of clay content (which in my specimen might help account for the dark color), or because of changes in volume when aragonite (chemically identical to calcite, calcium carbonate, but a different crystal structure with a different volume) changes to calcite which can happen during diagenesis, the process of sediment solidifying to rock.

Cone-in-cone might also result from pressure variations, either before or after the rock becomes solid. Pressure variations that might depend on the clay content could produce micro-fractures in the calcite that make the individual crystalline material slide consistently to make the cones. This more structural interpretation might be supported by the fact that my specimens are from a seam of calcite about 3 or 4 inches thick that was within thicker, stronger rocks.

Bottom line, the features are caused by some kind of microcrystalline displacement, but exactly how this happens is not settled.

This specimen is from near White Sulphur Springs, Montana. Collected in 2004.

Posted by Richard Gibson at 9:31 AM No comments: 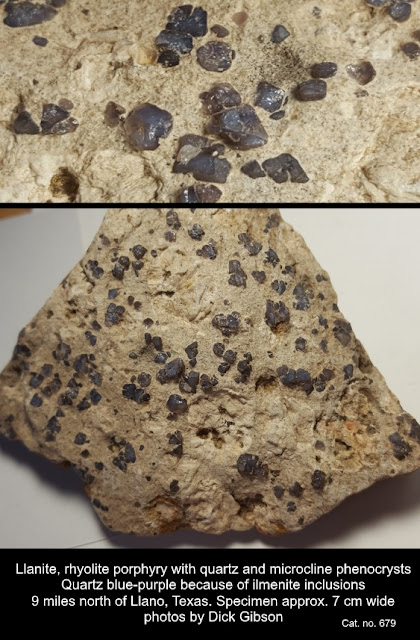 Mineral Monday + Tectonic Tuesday.  Blue quartz is uncommon and is usually colored by inclusions of unusual minerals like crocidolite, tourmaline, or dumortierite. The purplish-blue quartz here, from north of Llano, Texas, is colored by inclusions of ilmenite (iron-titanium oxide). This rock is called llanite for its occurrence in the Llano Uplift of central Texas, and although similar rocks are found in other parts of the world, the variety name llanite really only applies to this location. On a sunny day, the blue quartz in the rocks has an opalescent sheen that sometimes seems to “wink” at you from the outcrop.

More generally, the rock is a rhyolite porphyry – rhyolite meaning pretty high in silica (a granite-like composition) and formed at or near the surface of the earth, and porphyry meaning it has two grain sizes – a fine matrix, with larger crystals of quartz (and microcline feldspar) suspended in that matrix. This implies that there were two periods of cooling, one at deeper depths where it took the larger crystals a longer time to cool (and grow), followed by a later, quicker period of cooling, so the matrix crystallized so fast the grains are very small, but the larger, older grains are still there within the matrix.

All that cooling happened about 1,093,000,000 years ago (almost 1.1 billion) during a time called the Grenville Orogeny (orogeny means mountain-building) when what is now central Texas was amalgamated to the main part of the North American continent. The llanite was probably an aspect of the intrusions of the Town Mountain Granite, which has similar age but crystallized at greater depth. It’s part of a long belt that extends with some discontinuity to central Tennessee, through Kentucky and Ohio, then northeast across Ontario, Quebec, and into Labrador. Rocks now in southern Scandinavia were part of the Grenville mountain belt, the result of a collision between continental masses that was assembling the supercontinent Rodinia over a long period of time, from about 1,250 million years ago to 980 million years ago. 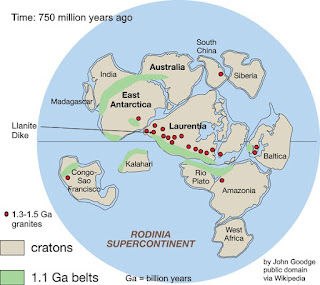 The llanite, in the form of a narrow dike, intruded older rocks toward the end of the Grenville Orogeny. The mountain belt continued into Mexico, and rocks of similar age are found in Australia and Antarctica as well as South America today. Exactly how those rocks fit into the big picture is still debated, but one version of the assembled continent of Rodinia is in the comments.

At left, one reconstruction (others exist) of Rodinia about 750 million years ago, just before it began to break up. “Rodinia” is from Russian for “motherand,” or “to give birth,” alluding to this continent’s early place in the rifting-collision cycles (called Wilson Cycles with respect to ocean basins, for J. Tuzo Wilson) that have followed. Even so, Rodinia was probably preceded by at least one earlier supercontinent, named Columbia – but that’s debated. 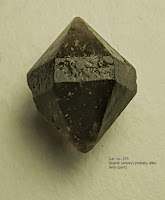 The phenocrysts (“showing” or “visible” crystals) of blue quartz in the llanite are supposed to be “beta quartz,” a high-temperature, higher symmetry form of quartz that can crystallize only above 573ºC – in fact, it cannot even exist at surface conditions and pressures, so all “beta quartz” is actually a pseudomorph (“false form”) of regular quartz that has formed as the original beta quartz cooled. This little crystal (not from Llano) is probably one such pseudomorph. (Technically, since I knew you wanted even more jargon, it’s a paramorph rather than a pseudomorph, because while the crystal structure has changed, the chemistry has not.) The essentially perfect hexagonal symmetry of this crystal marks it as a beta-quartz shape, versus the lower (trigonal) uneven symmetry typically displayed by normal quartz. It’s possible for normal trigonal quartz to have equally developed faces that appear fully hexagonal, but it’s unusual.

Posted by Richard Gibson at 6:09 AM No comments:

This Tectonic Tuesday is also an example of the History of Geology.
“The thrust producing these crustal movements and dislocations came from the west, and must have been highly energetic in its action, as some of the breaks are of huge proportions, and are accompanied by displacements of many thousands of feet. The faulted region is now about twenty-five miles wide, but a rough estimate places its original width at over fifty miles, the difference indicating the amount of compression is has suffered.”
With these words, R. G. McConnell was the first geologist to report the interpretation of low-angle thrust faults with significant throw in the western Cordillera of North America. McConnell’s study, entitled “Report on the Geological Structure of a portion of the Rocky Mountains,” was published in 1887 by the Geological and Natural History Survey of Canada. These cross-sections, near the 51st Parallel, accompanied the report. They document work during the field season of 1886, which was primarily spent in compiling a general geologic section along the line of the Canadian Pacific Railway.
The section begins on the right at Devil’s Gap, east of Devil’s Lake (now Lake Minnewanka) and extends westward toward Banff. Cascade Mountain, labeled on the section, is just north of Banff and rises to 9836 feet above sea level. The profile then approximately follows the railway up the valley of the Bow River, past Laggan (now the community of Lake Louise), and over the Continental Divide at Kicking Horse Pass. Cathedral Mountain (10,464 ft) and Mount Stephen, shown on the section, are just west of Kicking Horse Pass. The Burgess Shale, classic locality for soft-bodied Cambrian fossils, was discovered in 1909 by Chares D. Wolcott about three miles north of the summit of Mt. Stephen.
When later geologists defined the continuity of individual thrust faults in the Canadian Rockies, one of the major thrusts was named for McConnell. The photo of the Geological Survey Camp, used as the frontispiece of this report, was actually taken during Dawson’s surveys a few years later. Dawson’s work was generally in country to the south of that described by McConnell.
When I found this report in a used book store, it was falling apart – covers off, pages torn, and the edges of the loose, folded cross-section were severely damaged. Unfolded, the plate with the cross-sections is 10”x38” and it is hand-colored. The plate is shown below.

Posted by Richard Gibson at 1:58 PM No comments: