Plate tectonics, the process driven by heat convection down in the mantle, has operated pretty much continuously at least since the late Precambrian, and probably even longer than that. During the Ordovician, it seems that there may have been a little more “action” than at some other times – probably the normal variation in the intensity of tectonic activity.

Most of the supercontinent of Gondwana, which we first discussed on February 9, was finally assembled during the Ordovician, and it would remain together for the next 200 million years or more. At least by the late part of the Ordovician, Gondwana was situated near the south pole. 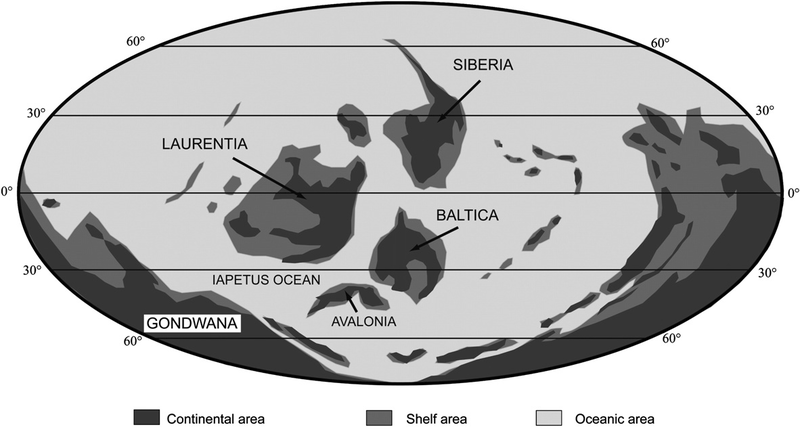 But apart from Gondwana, several important continental blocks, including Laurentia, which is the core of North America, Baltica, the heart of northern Europe, and Siberia, were still moving around pretty much independently. And moving continents means subduction zones, volcanic island arcs, and small continental blocks fragmenting and colliding. Those three major continental blocks, Laurentia, Baltica, and Siberia, were relatively close to each other, but there were also some complex island chains not too far away. One of the most important of those is called Avalonia, named for the Avalon Peninsula of Newfoundland.

The long, linear Avalon terrane today is found in Massachusetts, Maritime Canada, Newfoundland, southern Ireland and Britain, and maybe some bits of northwestern Europe. But during the Ordovician, it was separate from the major continental blocks. I think of Avalonia as something like the western Pacific today – from the Kamchatka Peninsula to Japan to the Philippines. A discontinuous string of continental fragments, volcanic islands, oceanic crust, and more – a real mess.  This string began to collide with North America during the Ordovician Period, probably causing the buckling of the crust that formed the Cincinnati Arch and Michigan Basin, which we talked about earlier this month. We’ll talk about the culmination of this collision, called the Taconic Orogeny, at the end of March.

You can imagine that such a complex strip of diverse geological settings wasn’t necessarily just sitting there idly, even before it collided. We’ll talk about some of the consequences of the plate tectonic events related to Avalonia in a few days.

See also http://jan.ucc.nau.edu/~rcb7/global_history.html
Posted by Richard Gibson at 5:00 AM