Through the year, we’ve talked about events that broke apart and combined the various tectonic plates on the earth, but today, as we’ve almost reached the present, I wanted to just summarize the way things are today.

First, I know I talked repeatedly about oceanic crust and continental crust. They are quite different from each other, in density, thickness, and mechanical behavior, and those differences drive subduction and plate tectonics. But the two types of crust also move together, a lot. The North American Plate includes all of the North American continent – except the bit of California west of the San Andreas Fault – but it also includes the oceanic crust beneath the North Atlantic Ocean, all the way out to the Mid-Atlantic Ridge. Iceland straddles the mid-ocean ridge, a pile of volcanic material erupted because of a hotspot at depth, but the west half of Iceland is part of the North American Plate, and the east half is on the Eurasian Plate.

Depending on exactly how you want to define “major,” there are 9 to 16 major plates. Africa has two sub-plates – Arabia, which is tectonically separated from Africa, but only by the width of the young Red Sea, and the Somalia Plate, breaking away along the East African Rift. The Somalia Plate is certainly separating from Africa, but in many ways and in many places, they’re still attached to each other too. 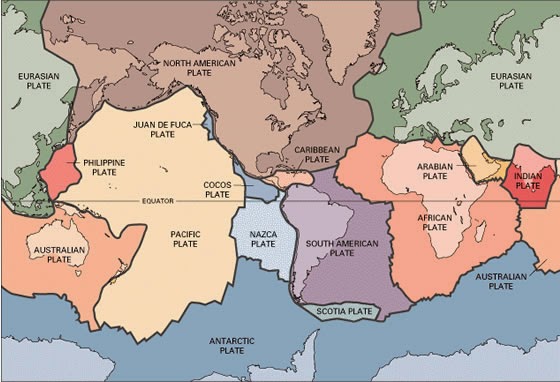 Australia and India have their own plates and include more oceanic crust than continental, but like the Americas, they are almost locked together now that India has collided with Eurasia and slowed down. Antarctica also has its own plate, and except in some small sections, Antarctica is entirely surrounded by oceanic rifts. Everything else is pulling away. How can that be possible? You can’t pull away everywhere. Well, you can, for a while – the excess is taken up by collisions elsewhere on the globe, but eventually, even if the active rift between West and East Antarctica opens up, part of the Antarctica Plate will start colliding somewhere.

The Pacific Plate is entirely oceanic – no continental material except the bit of California west of the San Andreas Fault, which is traveling with the Pacific Plate. And the Pacific Ocean is really underlain by two large plates – the larger Pacific, and east of the East Pacific Rise spreading center, the Nazca Plate which is subducting beneath South America to lift up the Andes. The eastern half of the oceanic plate in the North Pacific was called the Farallon Plate, but it has been almost entirely subducted beneath North America. That subduction made for the various mountain-building events that created the Rockies, the Sierra Nevada, and the Coast Ranges.

The other big plate is Eurasia – Europe, and Asia except for Arabia and India and the far eastern tip of Siberia, plus the east half of the North Atlantic Ocean.

The smaller plates make for some interesting geography and tectonic activity. Arabia, breaking away from Africa, makes the Red Sea, and colliding with Asia makes the mountains of Turkey, Iraq, and Iran, and the Caucasus. The Philippine Plate is a small oceanic plate in the western Pacific Ocean. The volcanoes of the Philippines, Taiwan, and southern Japan are the result of the Philippine Plate subducting beneath the complex eastern margin of Asia, and the Mariana Trench – the deepest point on the ocean floor – is on the opposite side of the Philippine Plate, where the Pacific Plate is subducting beneath it. When two oceanic plates collide as they are doing here, all bets are off. One may subduct beneath the other, or the other way around, and the directions of subduction can even flip.

Between North America and South America, the Caribbean Plate is mostly oceanic, but there are some continental blocks on it too, in Nicaragua. This small plate is overriding the oceanic part of the Americas Plate, resulting in the volcanoes of the West Indies. There’s a similar narrow plate between the southern part the South Atlantic Ocean and Antarctica, called the Scotia Plate. 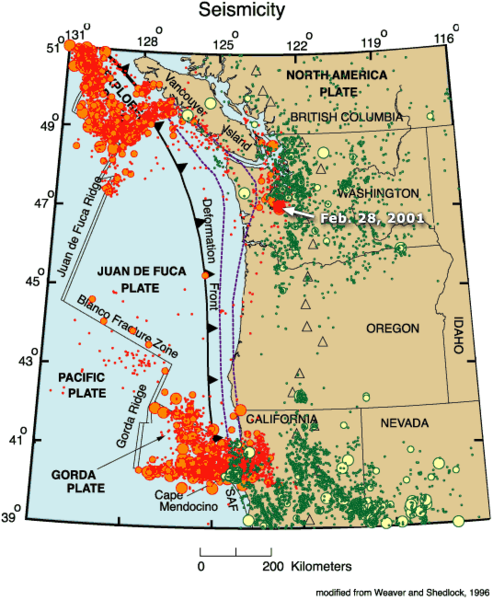 There are a bunch of little plates along the west coast of North America that are essentially the remnants of the old Farallon Plate – the remnants that haven’t yet been subducted. There’s the Cocos Plate, off southern Mexico, the Rivera Plate a bit further north, and the Gorda and Juan de Fuca Plates offshore from Oregon, Washington, and British Columbia. Where these plates in the northwest continue their ongoing subduction beneath North America, the subduction is producing a volcanic chain – the Cascade Mountains.

Beyond that, it starts to become a question of semantics – what’s a plate? In a way, every single zone bounded by active faults is an active plate – the fault separates two regions that are moving in different ways. But plates are really much grander objects, and they are separated from each other by really major breaks – not just a fault, but a change in the way the rocks behave and move. Even the small plates I described are considered to be plates because they are pretty clearly the left-over pieces of a once much larger plate.

Today, every possible kind of interaction between plates is ongoing simultaneously. The Pacific Plate slides past North America on the San Andreas Fault, but the Pacific Plate also is subducting beneath North America in Alaska and Mexico. North America and Eurasia are pulling apart along the Mid-Atlantic Ridge and along the Nansen Ridge in the Arctic Ocean, but the two plates are locked together in far eastern Siberia.

There are failed rifts all over the place, some of which were never much more than sags in the crust, such as the oil-rich Sirte Basin in Libya, and some of which became true oceanic spreading centers only to stop fairly quickly. That happened in what is now the South China Sea. Some subduction zones continue for tens of millions of years, and some abort after just a few million. The earth is an incredibly dynamic system – and what happens in one part of the globe will be accommodated, one way or another, even if the result is thousands of miles away. The dynamic earth isn’t just a recycling system for rocks, but it generates things that humans rely on daily, from oil to copper to salt. Plate tectonics is the basic underlying engine that drives the diversification of life, as well as its extinction.

Maps from USGS or NASA, public domain
Posted by Richard Gibson at 4:00 AM