So we’ve made it to the end of our geological year, covering 4.6 billion years of geologic time. 366 episodes, close to 180,000 words and a total of about 25 or 30 hours of programs. I hope you’ve enjoyed it! The podcast will not end, but the structure will change as we go into next year. It won’t be daily any more, sorry to say – there were times when it was really touch and go in terms of me getting the episodes out, but I’m happy to say I managed. Thanks for your interest – that was my main motivation once things got going.

I’m not certain exactly what sorts of topics next year will bring. I’m not going to try to cover “current events” in any particular way because there are many good blogs and podcasts that do that. I expect I may do a few more that use my own work as a basis, and some posts will probably be based on topics in my other book, What Things Are Made Of. I want to try to do a few interviews with geoscientists working on interesting topics, and that may give it a Montana-centric flavor, but we’ll try to make things pertinent to a wide audience. Since I only covered 366 topics – and they were selected largely based on my own prejudices – there’s certainly plenty more that we can look at. Feel free to submit questions or suggestions, either through the blog or email me at rigibson at earthlink.net. You’ll get a spamblocker message, but I’ll find your email. I’m not going to make any promises, but I am going to shoot for at least one episode every week or ten days next year.

I also will be assembling the existing podcasts into single recordings. I’m not sure how it will work in terms of file sizes, but I’m hoping that I can make each month of the previous series into one or two packages – without the repetition of the intro music and exit tagline. I’ll try to edit the episodes into those assemblies early in the coming year and make them available in the usual way, through the blog.

To close the year, I thought I might address what has been called the Sixth Extinction. Of all the mass extinctions in earth history, only five have been really, really devastating. Those are the ones at the end of the Ordovician, in the Late Devonian, the biggest of all at the end of the Permian, the Triassic-Jurassic extinction, and the one that ended the Cretaceous Period and the Mesozoic Era. The case has been made that we are presently in the midst of another mass extinction, the Sixth great one. 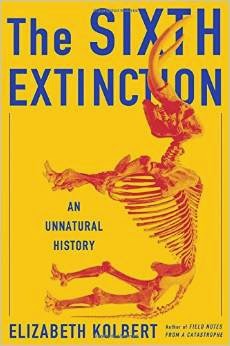 There is an entire book, titled The Sixth Extinction: An Unnatural History, by Elizabeth Kolbert. It just came out in 2014, and I recommend it highly. The New York Times Book Review listed it as one of the ten best books of 2014. The book makes the case for a present-day massive die-off of organisms, ranging from bugs and bats to corals and rhinos. We’ve seen in the podcasts in this series that things like climate change certainly affect extinction rates, and there is no question that earth’s climate is changing at high rates right now. There’s also no question that human activities are affecting many of the things that contribute to climate change. It’s happening.

Kolbert integrates our knowledge of past extinctions, such as the disappearance of the ammonites, which you have heard about in this podcast series, as lessons for the present.

We don’t really know how many species of plants and animals exist on earth today, although we have good ball-park estimates. New species, even new large animals, are being found all the time. So it’s hard to say with certainty what kind of extinction rate is in progress, but some estimates say that as far as we can tell, extinction rates today are as much as 1,000 times those that typified most of earth’s history. We might argue about whether what’s happening now is on a scale comparable to the Big Five Extinctions, but at some scale, an extinction event is assuredly in progress.

The big, charismatic animals, like rhinos, elephants, tigers, and whales, that need extensive spaces for their lifestyles, are probably most threatened by human pollution and invasion of habitat, but who knows what’s going on in the insect world or the frog world? Those who study frogs are concerned. Is it possible to help all, or even most, species survive in a human-dominated world? I certainly don’t know. Should we even try? From both the altruistic and selfish points of view, it would probably be advantageous to try. Even human-centric people can’t deny the continual discoveries of beneficial products that come from obscure plants and animals.

For me as a geologist, I sometimes take the long view – the earth does not care. If humans kill off lots of things, including perhaps themselves, earth, and life, will continue. It always has, and until the sun burns out or some incredible catastrophe happens, it always will.

Animals that went extinct in 2014
Posted by Richard Gibson at 4:00 AM